The 2014 Business Champions were presented their awards by, Eric Tech, Navistar’s Senior Vice President, Strategy and Planning and President, Global and Specialty Businesses and keynote speaker at the Annual Dinner and by Susan Milford, MCEDC Chairwoman of the Board, and Pam Cumpata, President MCEDC.

Steve Middaugh of Edward Jones Investments and chairman of the Business Champions Task Force noted that for the first time ever, in the Small Category 1 (less than 25 employees) there was a statistical tie. The first award went to a company who has been in business for 45 years, had made hard decisions during the recession to redirect its focus, whose upper management is involved with many countywide projects and organizations, who increased its training efforts to become more efficient and profitable, and who is expecting a 50% growth in revenue and 30% in workforce in the near future. Accepting the award for RADICOM of McHenry, was Phil Bartmann, President and Chief Executive Office and Bob Lueders, Executive Vice President and Chief Operating Officer. President Cumpata commented that this outstanding company is a leader in developing and integrating advanced communication systems for public safety and commercial enterprises, specializing in system design, sale and service support of two-way radio, microwave conveyance, telephone systems and radio/911 dispatch systems and both Phil and Bob are active in many organizations and that Radicom is also a long time investor/member in MCEDC. 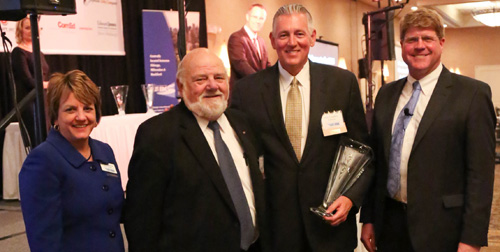 The second award winning company in the small category was presented to Tegel Design in Huntley. This company has been in the county for 9 years, survived the 2008 to 2010 hard times by focusing on life cycle costs, sees innovation as the life blood of a company, promotes “made in the USA” products and global exporting, has a passion for the education and development of our future workforce, brings that passion to realty with an apprenticeship program and outreach to local high school students and wants to develop local incubators for manufacturing growth in McHenry County. Cumpata said that President Robert Tegel has been an active supporter of the MCEDC workforce of the future projects and that she is delighted to have him recognized for his passion, energy, enthusiasm and business acumen. Tegel Design are inventors of industrial machinery adaptable to multiple industries, including automotive, medical, industrial electronics, consumer and textiles. 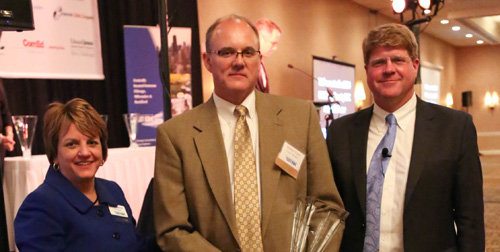 In the mid-size company category of 25 to 100 employees, MAC Automation of Woodstock is the 2014 Business Champion. This business has called McHenry County home for over 30 years, is family owned growing from 2 employees to a 47 member team, and during the recession, stood together and implemented a voluntary furlough program. They have grown by 7% in 2013 and 15% in 2013 and have a company philosophy “the power of a little Bit” and put that into practice through community charities and supporting workforce education program and internships. MAC automation is poised to continue their growth as they grow from plastics to machine tooling. Cumpata congratulated Jackie Speciale Accounting/Purchasing Senior Manager and Theresa Reynolds, Production Senior Manager representing MAC Automation and thanked them for their support of the recent MCEDC Manufacturing EXPO honoring Manufacturing Day October 3rd, 2014. MAC Automation serves the plastics industry with auxiliary equipment, conveyers, automation equipment, automated box fill systems, portable resin bins, resin loaders, part/runner separators and diverters, inspection tables, cleanrooms, drum and Gaylord box filter covers to name a few. Cumpata noted further that not only does MAC Automation offer high quality, cost effective automations solutions, they also have committed both time and effort to help grow the workforce of the future. 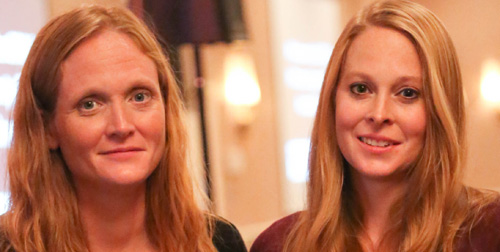 In the large category of companies that employee 101 to 299 employees, the 2014 Business Champion award recipient was another family owned business who has been serving its customers for over 37 years. During the recent recession its industry was severely impacted, but it choose to refocus its efforts, its operations and its resources, made significant investments to upgrade its technology, focused on increasing environmentally friendly and green options with LEED certified products and installation and is a highly regarded and recognized leader in its industry. Michael Smeja, Daniel Smeja, and Rock Smeja accepted the award for Metalmaster Roofmaster of McHenry. Middaugh noted that Metalmaster Roofmaster had been named # 33 in the top 100 Metal Roofers in North America, and most recently in June placed #1 for tonnage and #5 for square footage. They also won 3 prestigious awards from Firestone Building Products including Master Contractor, Inner Circle of Quality and Presidents Club. 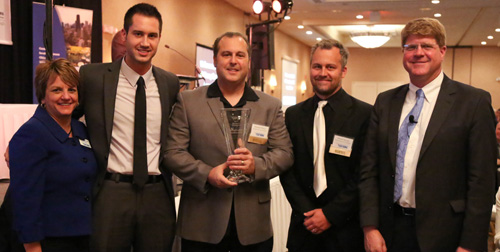 In the category of over 300 employees, MCEDC presented two awards – one for a publicly traded business and one for a privately held business and. Middaugh commented that “the award winning publicly held company focuses on the principle of the 3 P’s – Pride – Perfection and Performance” and he added ‘a 4th P – Pickles’! The plant manager, Olivier Lemoine, accepted the award for Clausen Pickles – Kraft Foods of Woodstock. Middaugh stated that Clausen has been in McHenry County for over 38 years, has made significant investments in technology and training and has a saying “from vine to jar in 8 days” as they follow the sun to secure cucumbers from the sunniest climates from the south to the Midwest. 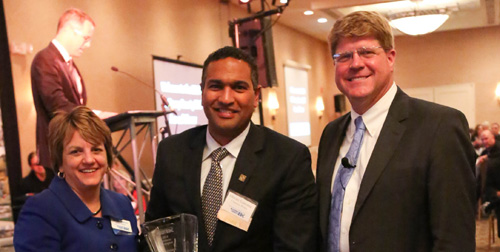 The privately held company recognized in this over 300 employee category was Charter Dura-Bar of Woodstock. Middaugh noted that this company has added new equipment designed to improve product safety, made a $5.9 million new capital investment, expanded its workforce since 2013 hiring 30 new full time employees, and is on track to double their revenues by 2018. Cumpata stated “Charter Dura-Bar is always supportive of our MCEDC workforce of the future projects and efforts and is a recognized leader in the manufacturing and distribution of continuous cast iron bar stock. It’s engineered iron product called Dura-Bar offers machining advantages over carbon and alloy steel and is it allows manufacturers to increase profit margins by machining more parts per hour, decreasing cycle time and increasing profitability”. Peter Murray, Vice President and General Manager accepted the award. 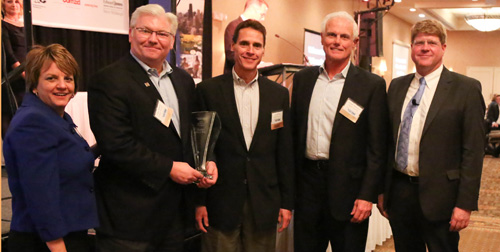